For a loudspeaker to faithfully reproduce a sound, it’s critical that the cone moves directly in and out of the frame in sync with the drive signal. For this to happen, the voice coil and the current through it must remain perpendicular to the field in the magnet gap. 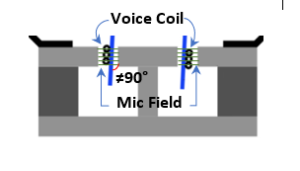 To maintain alignment with the magnetic field, the cone/coil system is suspended at two locations: the surround and spider. 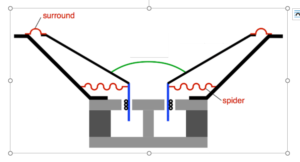 Most people observing a loudspeaker driver in action can see the surround function. The cone moves in/out and the surround deforms slightly but returns to the rest position when the sound stops. And, looking at several drivers, a number of different surround materials can be found. These can range from the simple corrugation of a cone’s material (e.g. paper, mylar) to the addition of a secondary material like cloth, foam, or rubber. As long as the surround has good elastic properties, it does the trick. Shapes can vary from a simple roll to various serrations along the surround. The combination of material and shape are used to control surround’s compliance.

But, if this was the only suspension point, the cone could still yaw. One side of the surround would just deform slightly more than the other side. As long as the surround isn’t damaged, it will continue to perform its function. So, we add a spider…

Arachnophobes, fear not! Trust me, you want this spider. While the surround can deform differently on opposite sides, it’s still difficult for the cone to move side-to-side. The spider is a second support between the voice coil bobbin and the frame. And, like the surround, it acts as a spring that can tilt but not shift easily, side-to-side. But, if the spider limits sideways motion, the surround tilt is minimized. And the surround’s limited lateral motion also mitigates the spider tilt.

Since the location of the voice coil in the gap plays such a central role to the proper functioning of the driver’s “motor”, the spider is often the stiffer of the two springs. Common materials are cotton, polyester-cotton, and nomex. These are often shaped and chemically treated to adjust the compliance.

As always, if you have any special suspension needs, please contact us. The superior technical support integral to the Stetron-customer design cycle helps to keep our customers satisfied.