As we discussed in our last blog Anatomy of an Electret Condenser Microphone, the basic structure of an Electret Condenser Microphone (ECM) is a pair of parallel plates, one of which is a moveable diaphragm, and another is a fixed back plate. A special layer of material called electret is attached either on the diaphragm side or on the back plate side. After charging, this electret layer can permanently hold a fixed amount of electric charge, making the two parallel plates form a parallel plate capacitor. The capacitance is proportional to the area of the plate and inversely proportional to the distance between the two plates, as represented as the formula below:

The variable electric signal then is picked up and amplified by an integrated preamplifier (normally a FET) inside the microphone, and finally sent out as the microphone output. Although the electret material doesn’t require external polarizing voltage, the preamplifier does need a small DC power supply, usually from 1V to 10V. 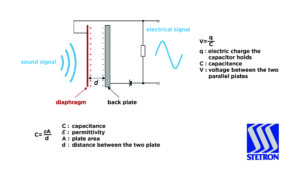 Have questions? Let us help. We are your source for audio solutions.